Wading in the Creek

Summer days on the farm, sun high in the languid sky, air so still a body could almost hear the corn growing, the two girls crawled beneath the fence, scrambled down the slope through tall grass till they reached the place where mosquitoes hummed and cowslip grew along the creek.

Once there, they shucked off shoes, held dresses high above their knees as they entered cool dark water, feeling their way through ripple and rivulet over packed dirt slippery to the step. Patches of cooler depths gave way to sun-warm shallows, bullfrogs grunting from the reeds, till water widened over sand and butterflies hovered like yellow flakes.

By then their dresses were already wet, so they laughed and splashed each other and slapped the water to hear the smacking sound. Sometimes they lay down amid the minnows, arms and legs undulating like cloud shadows, and pretended to swim. Other times they crouched in the slew, conjuring landscapes from promontories of mud (capes, peninsulas, fiords, bays, beaches—coastal scenes from an inland girl’s dreams) till sun sank low in the sultry sky and they knew their mother would be calling. Then they smoothed their wet skirts, wiped the mud from their faces, and clambered up the hill to supper.

Years later, one of them would travel to one hundred seventeen countries on seven continents of the spinning globe, while the other would make her life in a place her neighbors knew only from church-tales of the Holy Land. Each would journey more miles in a year than their immigrant forbears had traversed in a lifetime. They would eat strange foods and watch the sun set over landscapes so far from the family farm that it was easy to think they’d never reach home again. But if anyone had told them this then, they’d have laughed, for no matter how far a-field imagination took them, they always ended up back at the farmhouse, tiptoe at the kitchen sink, rinsing creek water off their arms.

It’s not that I want to change their lives, transfix them in that moment between day and dark, afternoon winding down, potatoes frying on the stove for supper, cats weaving around their feet as they giggled softly about the long day’s playing. I just want to believe in a time when afternoon stretched out forever: when there was always a tomorrow rolling up, long and languid and innocent as the creek flowing cool and promising over childhood feet.

In memory of Jean and Marian Stoltenberg 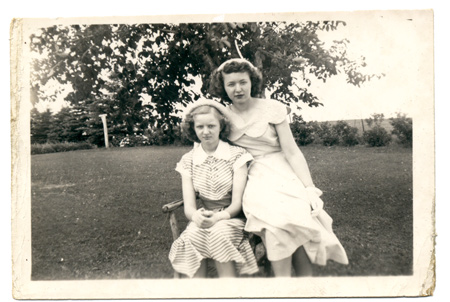 Wandering the lanes of memory:the author, Amman, Jordan, circa 1967.

I was a small child climbing walls, defying my father’s injunctions.
Who wants a tomboy for a wife? I clambered up cherry trees,
skinned my knees, rode my bike farther than I was allowed
to go. On picnics I collected rocks, hoarding them in the old tin can
I kept under my bed. It rattled like my mother’s button box.

My father planted jasmine, watered rosebushes. My mother
weeded the strawberry patch, picked berries, juice staining
her mouth and hands. My grandmother gathered ba’elli
from the garden, boiled Easter eggs in onion skin, fasted
two weeks each year in gratitude that her baby, my father, had lived.

That was years ago. Now they’re gone, all of them. Chinks
in me fill with voices like green things sprouting, wisps of life
between rocks. Birds drop seed, soil collects in pockets.

I tilt toward the earth, leaning with the weather, held
in place by little more than gravity and the tenacious will
of someone who gathered stones from the field, placing them
one atop another, trying to make something that would stay.
From how many lives? I build myself up as I go. 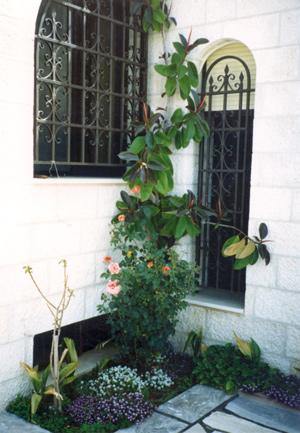 Tata Bahiyeh was light
in the bones and older
than anyone: hands stained
with brown spots, flesh
so dry it folded
in ridges. Her touch
was like jasmine
flowering at night,
secret life slow
through the tough brown vine.

Bahiyeh loved apricots,
sun’s fruit, rivulets
sweet down her storied
skin. The pits she spat
in her palm were a promise,
not to be wasted. Cracked,
you could eat the firm
white heart within. Planted,
seed pledged to grow.

Bahiyeh was like all
the old ones, longing
for earth and the light
off Al-Aqsa, olive trees
rooted on hills—prayers
under breathing. Their eyes
were pathways, marked out
and empty: at least
to be buried there,
earth cradling bones
in a final planting.

Like all of them,
she tucked packets
of tissue-wrapped seeds
(each with its story)
in drawers, behind
clocks, on shelves:
to plant in the better time,
insha’allah. Meanwhile,
travelers eastward
brought cuttings, sprigs
in the luggage: olive
and plum, bitter orange
and sweet black grape.

She didn’t want much
in death, just a place
to rest. She was lucky,
had the papers, could cross.
But when Bahiyeh died,
the soldiers dumped her body
without ceremony
on the concrete floor,
probed roughly
into sheltered crevices
of her stiffened corpse.
They expected contraband,
money, munitions,
anything but death.
They found
what they should
have expected.

What light
remained in her bones
still beyond desecrating hands
shone hidden
and private.

When you look,
you find seeds, dusty
and shriveled,
brown shells fragile
like ancient bones.
You remember
how to lay kernels
in earth, pour water,
wait for the green
shoot thrusting,
amazed how seeds
harbor their light
within. Bahiyeh’s bones
lie buried in girlhood
soil. You watch for
that steady emanation
of light. You learn
how to wait
after planting. 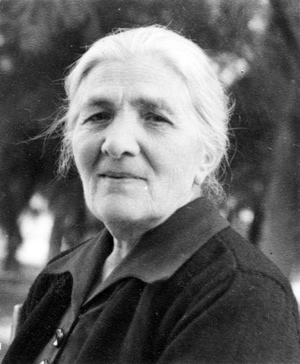 Lisa Suhair Majaj, a Palestinian American, was born in Hawarden, Iowa, in 1960, raised in Amman, Jordan, and educated at the American University of Beirut, Lebanon and at the University of Michigan in Ann Arbor. She lived in the US for nineteen years before moving to Nicosia, Cyprus, in 2001. A poet, writer and critic, she has published poetry, creative non-fiction, academic articles and reviews in a wide range of journals and anthologies, in two poetry chapbooks, and in the collection Geographies of Light, for which she was awarded the 2008 Del Sol Press Poetry Prize. Her poetry has been translated into several languages and has been used in a variety of forums, including art and photography exhibitions. She has read and lectured across the US and in the UK, Bahrain, Germany, Cyprus, Israel, and Jordan. She is also co-editor of three collections of critical essays: Going Global: The Transnational Reception of Third World Women Writers (2000), Intersections: Gender, Nation and Community in Arab Women’s Novels (2002) and Etel Adnan: Critical Essays on the Arab-American Writer and Artist (2002).

Articles in Issue no. 55

Fragments of an Autobiography or Remembering in the House of Time: From London to Wisconsin, 1933–2010

A Hall of Mirrors